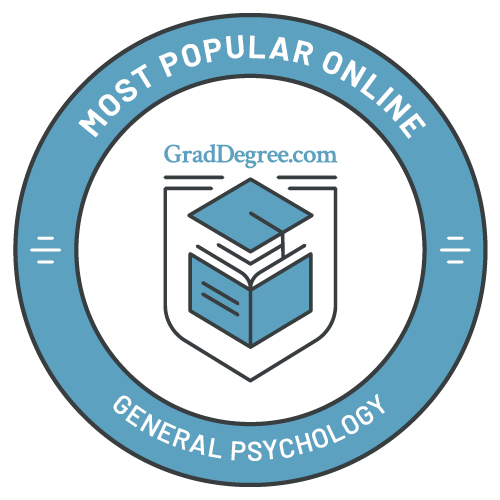 Finding the Most Popular Online General Psychology School for You

In 2018-2019, 8,087 people earned a degree or certificate in general psychology, making the major the #36 most popular in the United States.

When it comes to higher education, there are a lot of options for students. With more and more schools offering online options, you could even register for a great program on the other side of the country. On top of that, there are a considerable number of trade schools that offer fast-track entry to many fields.

The Most Popular Online General Psychology Schools ranking is one of many tools that Grad Degree Search has developed to help you make your educational decision. Our analysis looked at 16 schools in the United States to see which online programs were the most popular for students. To create this ranking we looked at how many students graduated from schools with online programs.

2021 Most Popular Online General Psychology Schools in the United States

Check out the online psychology programs at these schools if you want to attend one of the most popular in the United States.

Our analysis found Walden University to be the most popular school for general psychology students who want to pursue an online degree in the United States. Located in the city of Minneapolis, Walden University is a private for-profit college with a fairly large student population.

You’ll join some of the best and brightest minds around you if you attend Northcentral University. The school came in at #2 on this year’s Most Popular Online General Psychology Schools list. Located in the large city of San Diego, Northcentral University is a private not-for-profit school with a large student population.

Out of the 16 schools in the United States that were part of this year’s ranking, University of Massachusetts - Lowell landed the # 3 spot on the list. Located in the suburb of Lowell, UMass Lowell is a public school with a fairly large student population.

Out of the 16 schools in the United States that were part of this year’s ranking, Capella University landed the # 4 spot on the list. Capella University is a fairly large private for-profit school located in the city of Minneapolis.

A rank of #5 on this year’s list means University of Missouri - Columbia is a great place for general psychology students pursuing an online degree. Located in the midsize city of Columbia, Mizzou is a public college with a very large student population.

Saybrook University did quite well in this year’s ranking of the best schools for general psychology students. It came in at #6 on the list. Saybrook University is a small private not-for-profit school located in the midsize city of Oakland.

Angelo State University came in at #7 in this year’s edition of the Most Popular Online General Psychology Schools ranking. Located in the midsize city of San Angelo, Angelo State is a public school with a fairly large student population.

View the Most Popular Online General Psychology Schools for a specific region near you.

One of 3 majors within the area of study, general psychology has other similar majors worth exploring.

*These averages are for the top 16 schools only.